In middle school orchestra, my teacher had a mantra: “Fake it ’til you make it.”

This was because eleven- and twelve-year-olds, with the exception of the talented ones, are not very good at playing stringed instruments. However, the rationale was, it’s better to look like you know what you’re doing. As opposed to sitting there in the middle of a Thursday night concert with your rented violin in your lap trying to figure out where you went wrong.

So if you messed up during a piece of music, you were just supposed to keep moving your bow, even if you weren’t playing any notes, until you found a place to jump back in.

Fake it ’til you make it.

I have been pleasantly surprised at how applicable this extremely context-dependent piece of advice has been to other areas of my life.

Now, before you accuse me of endorsing fraudulence, allow me to explain.

to plot or not to plot

There are two types of writers in the world: those who plot their stories, and those who don’t.

Neither is wrong, nor it is necessarily true that writers always go one way or the other.

However, this I know: anyone who says who have to plot out your entire story before you can write it is lying, because no one–or next to no one–actually does it.

I’ll show you what I mean.

When you’re plotting a story–whether it’s with a handy little chart, or the triangle thing you used in high school, or just jotting down a list, you’re creating an outline. And an outline is, by definition, incomplete. It’s changeable. It’s there to give you a guideline, but you know how guidelines are…

Obviously, plots are fickle things. And I don’t know about you, but I find it very difficult to come up with a full-fledged plot–beginning, middle, and end–before I’ve ever started writing.

It’s like when people ask you what your five- or ten-year plan is. Maybe you have an idea of where you wanna be by then, but in all honesty, how the hell are you supposed to know right now?

It’s much the same way, I would argue, with your writing. And don’t get me wrong–a fictional story and your actual life are two very different things. (What is it they say? “Truth is stranger than fiction”? Ain’t that the truth.)

But at least from a storytelling perspective, it seems a little premature to try to have your whole story plotted out–beginning, middle, end, with all your conflicts and world-building mapped out–before you’ve even tried to write it. Especially if a) you only have one piece that you’re sure about, like a character or an inciting incident, and/or b) you’re not a plot-driven writer to begin with.

It’s way too easy to paint yourself into a corner if you think that you have to have a plan going in when instead, you could be thinking of your plot outline as a sort of story lab where everything is subject to change.

Did you get to the middle and realize the beginning doesn’t make sense? Rework the plot.

Did you have a certain ending in mind, but now that you’re there, you realize maybe it should end a different way? Rework the plot (in this case, the ending of said plot).

Do you feel like your characters are being forced to do the things you’ve outlined, and that they don’t actually fit with their characterization? Rework the plot.

You’re not stuck. Nothing is set in stone. I think sometimes we as writers forget that, especially if you start out with a certain idea in your head.

a new way of thinking about plot

As I mentioned in passing, many of us are probably familiar with that triangle-y plot structure we had to use in high school. You know, this one? 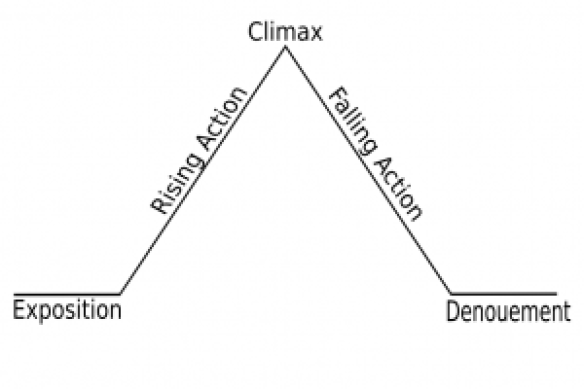 And this is by no means wrong; in a lot of cases, this is actually a pretty accurate representation of basic plot structure. But it’s also pretty broad-strokes, and kind of… rigid. Academic. A little too New Critical for my taste.

Again, not saying this is wrong. You should probably have all these elements in your story. But personally, I never liked the visual.

Then, once upon a time, I went to a writing camp in Iowa (land of the corn!) and took an amazing plot workshop by author Venise Berry. Absolutely fantastic, and she was such a sweetheart. Still been meaning to read her work, but I digress.

So, I probably butchered this, but what this visual really did for me was make the idea of plotting a story a lot more fluid. You can shift things around as needed. It didn’t matter what Transformation 1 and 2 were, as long as the events preceding it made sense and it felt like a change in the story. You could also have more than two, of course. Or just one.

Sometimes, you just don’t know how you’re gonna get from point A to point B. Maybe you know what the points are, and it’s just a matter of getting to them. Maybe you won’t even know the points until you get to them. Maybe you think point A will be one thing, but because of decisions the characters made, it ends up being something else.

Often, if you go in with an attitude of discovery, you’ll have a much easier time writing than if you go in with the idea that the plot has to be a certain way. I don’t know about you, but I’ve written a lot of bad stories that way.

the plot thickens (and i finally tie in my metaphor)

It’s really hard to dictate what constitutes a solid plot, but I think we intuitively know–keeping in mind that culturally, we’re often conditioned to expect our stories to be structured a certain way–when a story makes sense and when it doesn’t. Usually, it has a lot to do with the characters. If their decisions make sense, then often, the plot will make sense, too.

And I don’t mean “make sense” like the characters are always making rational, logical decisions. I think we’re all aware of just how much that doesn’t happen. But maybe the better word here is “believable.”

When your plot trips you up, don’t freeze like a middle school violist. Don’t get plot paralysis. Keep playing. Keep writing. Be flexible, ready for anything, ready to mess up. Sometimes you do all the prep-work, and you don’t realize until you start that you actually have no idea what you’re doing, or that it sucks way more than you thought. That doesn’t mean you have to trash the story–or your fledgling musical career–it means you have to go back to the drawing board.

Can you go in with no plan? I’m sure some writers do this, just as I’m sure some writers meticulously plot their stories. Personally, I’m prone to the former. But going in with absolutely no direction whatsoever has definitely resulted in some chaos. Kind of like going into an orchestra concert without having practiced the music at all.

So if you’re like me and prefer to watch the plot unfold before your eyes, maybe go in with a few footholds: an inciting incident, a transformation, an ending–something.

Remember: you can always go back and change it. In the meantime, fake it ’til you make it.

Image by Steve Johnson from Pixabay

How do you plot your stories? Do you plan everything out in advance, or jump in head-first and hope for the best?

there is malarky afoot. View all posts by becca

2 thoughts on “fake it ’til you make it: why plotting stories is a lie”