Book review time! Since all of us sorry sons of bitches are stuck at home anyway, might as well read a damn book, right? I know, I just had to go there. But if I don’t make light of this, I think I’ll implode. So please, laugh! Or scoff? Derisive chuckle, perhaps?

[Disclaimer: this post contains affiliate links. If you choose to purchase using my link, I will receive a small commission at no additional cost to you.]

Once upon a time, Larissa Lopes (@lalalopes), whom I’d met through the #WritingCommunity on Twitter (I don’t remember how, though, but I’m glad I did!), sent out a tweet saying she had a book coming out soon about a girl who falls in love with a pop star. She asked if anyone was interested in being an ARC reader, and I was like, “That sounds right up my alley!” Spoiler alert: it was.

I really do consider myself a critical reader. But I’m also a writer, which means I know what it feels like to be criticized. I really prefer to give good reviews, or at least constructive ones. It’s easy to get nit-picky, but I don’t like doing it unless I really feel it detracted from the reading experience. I’d rather focus on the salient features. So I was beyond relieved that I got to give All My Love, Alec Brock a positive review. These are all my honest opinions. I volunteered, I received a digital ARC copy, and I read it in my free time. (Didn’t take long–it was a page-turner!) So that’s the disclaimer, now how about the actual review?

First, a quick synopsis (as it appears on Larissa’s website):

“Every fangirl’s dream … and nightmare.”

Linda González has given up small-town life with her mom, to pursue a better education, living with her dad in Los Angeles. At least that’s what she lets her family believe. The truth is that she’s in love…with an 18-year-old pop star!

Alec Brock has been her cyber boyfriend for over a year now, and Linda has finally closed the gap in their long-distance relationship. But when she surprises Alec in LA, he has no idea who she is.

​In this terrifying turn of events, Linda has nobody to rely on but the real Alec himself. Now she’s torn between chasing the truth about the guy she fell in love with, and trying to win the heart of the guy he was supposed to be. 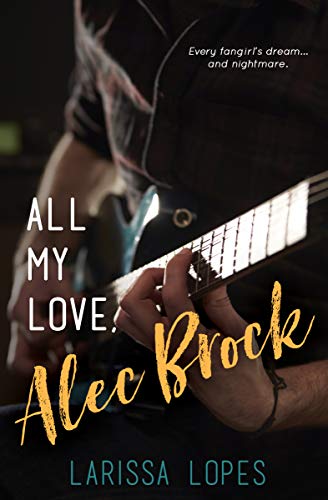 All My Love, Alec Brock was a joy to read. Not only did the concept pique my interest, but the plot and characters hit a lot of chords for me. (No pun intended!) Linda, our protagonist, has a strong and relatable voice. Watching her go through heartbreak but ultimately come out stronger because of it was a really satisfying and nuanced character arc.

And then, of course, there’s Alec Brock. He’s no archetypical dreamboat like you may expect from a love interest–I actually found him very three-dimensional, which I think is hard to do when you’re writing a character who is genuinely a good, caring person, as Alec is. But those people exist, and they are also complicated and flawed, which I think the author did a very nice job of showing us.

I love how their relationship developed, and even though my rational brain had to acknowledge some of the coincidences that incite the story (that, because of circumstances within it, had a forgivingly higher probability anyhow), I could still suspend my disbelief and enter into this story whole-heartedly. It was fun and heartwarming (and really hard to put down)! I can honestly say I hadn’t felt this satisfied after reading a romance in, like, forever. Can’t wait for Book 2!

You can buy All My Love, Alec Brock here or click the image below!

This book is for every girl who’s ever crushed on a pop star, who’s ever been in a long-distance relationship (oh, me, me, me!), and who’s ever had a life-changing betrayal shake them from the inside out. (Also me, though maybe not as bad as Linda…)

Also, was anybody else reminded of the Disney Channel Movie Starstruck while reading this, but, like, in reverse? Does anybody remember that movie???

ALSO, and I’m totally copying this idea from Lala’s Book Reviews, but I couldn’t help but come up with a playlist while I was putting together this post. I promise mine’s different and probably off-brand because I listen to a lot of indie and pop punk (but hey, they do go to a pop punk concert in the book!!! I kinda imagined it was a nod to FOB or Panic! but Larissa, let me know if I’m wrong!) But I love me a book playlist so here we go!!!

this isn’t the end

Larissa graciously agreed to do a guest post here as part of the larger Alec Brock blog tour, which you can read here! It’s amazing, go read it! Do it! Do it now!

Featured image by Free-Photos from Pixabay

there is malarky afoot. View all posts by becca

One thought on “why you should read All My Love, Alec Brock”